My Introduction to Shojin Ryori 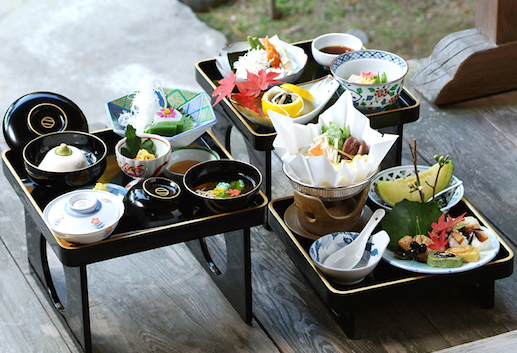 Still spritely at 82 and with a constant twinkle in her eye, Ogino-san was a respected tea ceremony master who introduced me to the art of shojin ryori when I was living in a small rural village in the mountains of Japan. Carrying on the tradition of her family who had been in the village since ancient times, Ogino-san specialised in preparing the cuisine that accompanies tea ceremony called ‘cha-kaiseki,’ which is the cuisine that so influenced both the international macrobiotic movement and also French nouvelle cuisine. In the village there were always seasonal festivals and all of them were centred around the village temple and all of them involved elaborate preparations of appropriate seasonal foods.

On one particular day that made a deep impression on me, the ancient weeping cherry tree in front of the temple was a cascade of pale pink as the women of the village gathered to prepare the boxed lunches for the hundred or so villagers who would be coming for the Spring Festival that afternoon. It was a fresh sunny day and we were all laughing and chatting, eagerly looking forward to the day’s celebrations. But before we started, we stood in reverent silence as Ogino-san slowly and gracefully prepared five beautiful dishes of special treats and placed them carefully onto a red lacquer tray, all the while chanting prayers in a practiced melodic voice. On this tray was the food to be offered before the festivities began at the altar of Kannon, the deity of compassion and the principle deity enshrined in the temple. 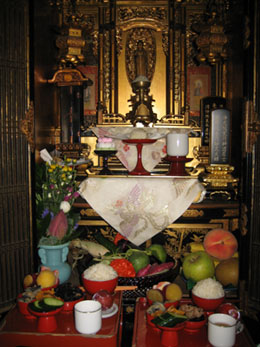 After placing the tray on the altar, Ogino-san bowed low towards the image of Kannon, with her hands clasped in silent prayer, after a few minutes, she turned to us all and with a big smile and clap of her hands ordered our return to the kitchen to begin preparing the festival food under her watchful eye. Although the mood was very upbeat and rowdy, there was a calmness and a reverence about the way we proceeded that had been affected by witnessing Ogino-san’s ritual preparation of the altar tray. I suddenly became aware that preparing the food for the villagers and then offering it to them also formed a part of this ongoing sacred act of serving food. And the food really did taste so much better when prepared with this awareness!

This event made a deep impression on me and I began helping Ogino-san in the temple kitchen several times a week, even though at that time I wasn’t really interested in Buddhism in a religious way. As well as learning about the way that food is prepared for offering on the Kannon altar, I began to learn the principles of Zen cuisine that completely changed the way I viewed cooking and eating.

In later years, while training to becoming a Buddhist priest myself in the temple village of Koyasan, I spent a lot of time working in the temple kitchen, where continued to learn about shojin ryori under the guidance of the temple chef, Kinoshita-san. Shojin ryori is considered an important cultural heritage in the mountain village of Koyasan, a World Heritage listed site in the mountains south of Osaka, with several hundred temples, many of which provide accommodation for pilgrims and visitors to the village. The preparation, serving and eating of food is an important mediation practice that involves a deep awareness of all the elements that have combined to bring this moment of eating to fruition, including all the people who worked to get the ingredients to the temple kitchen and even the sunshine, earth, rain and bugs for helping the food to grow. It is a deep philosophy of living. The lessons I acquired from my teachers, and the knowledge I continue to gain by translating the books and websites of shojin ryori specialists in Japan is what I would like to share with you in this blog. Itadakimasu! Bon Appetit! 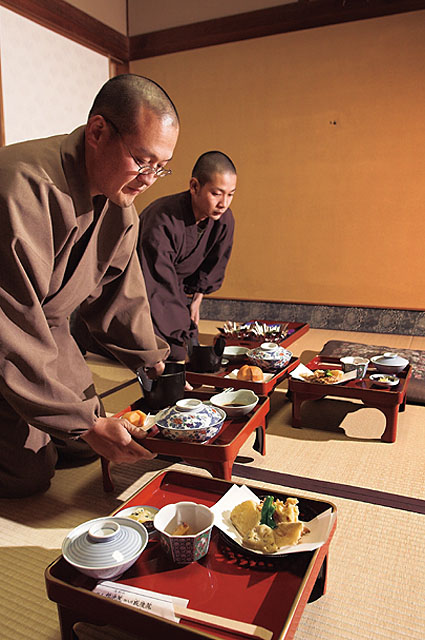