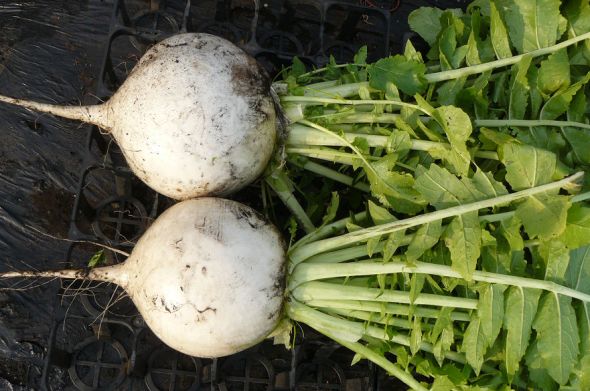 Shōgoin daikon 聖護院大根 is one of the traditional vegetables of Kyoto and is sometimes referred to as Kyo-daikon. It is said that during the early 19th century, a farmer moved to Kyoto from Owari province (present-day Aichi-ken) and started cultivating ordinary long daikon radishes in the vicinity of the temple Shōgoin. It seems that some of the daikon seeds produced a mutant round daikon, but the farmer was so intrigued with this new vegetable that he continued to cultivate the variation instead of the regular-shaped daikon. Since then it has become one of Kyoto’s unique vegetables, valued for its shape and its very fine white flesh with a mild flavour, much suited to the delicacy of Kyoto cuisine. When boiled it keeps its firm texture and doesn’t break apart like regular daikon.

The shōgoin daikon is mostly now grown in the northern part of Kyoto prefecture in the Tango area, where the heavy snowfalls in winter produce the best flavour. It is also dried and shipped all over Japan. It is sometimes called vegetarian dried squid because of its resemblance to the squid which are cut and dried on racks in a similar way.

Shōgoin daikon can be prepared in much the same ways as standard daikon, but the flavour is milder and slightly sweeter, with a firmer texture; however, it is rarely used as “oroshi” (finely grated).

Kunio Tokuoka, owner-chef of the famous Kitcho restaurant, has this to say about daikon:

“Even though daikon is most well known as an accompaniment to other foods, such as finely grated and served with whitebait or grated with a dash of shoyu (soy sauce) served with mackerel and so on, at Kitcho we like to serve our customers something with a little element of surprise, so daikon is prepared in a more unpredictable way such as grilled or as tempura. Unlike turnips, in which all parts can be used, only the very middle part of the daikon is used, where the flavour is at its best.” 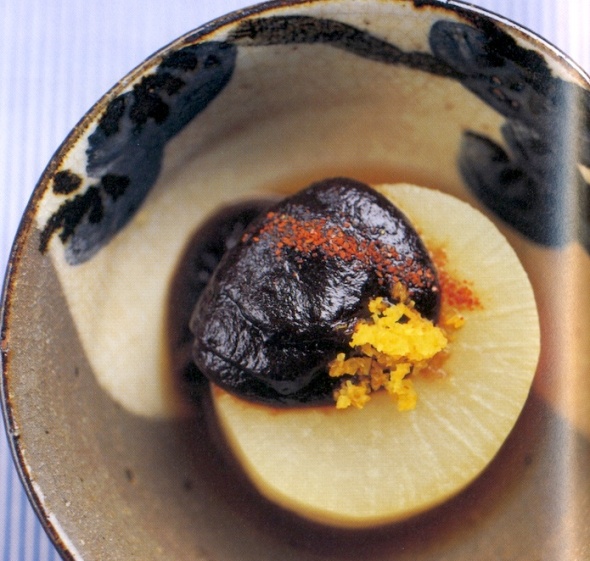 Daikon
Konbu dashi
First lot of rinse water that was used to clean the rice for dinner (this water contains rice starch that keeps the daikon from discolouring and maintains a bright whiteness)
Awase-miso (miso sauce):
100 gms hatcho-miso: the most highly regarded miso, a rich dark brown, made only from soybeans
135 mls sake
100 gms sugar
Yoke of one small egg

How to make the awase-miso:
Firstly, mix the egg yolk and sugar well, then blend in the sake. Warm the hatcho miso in bain marie. When it’s cooled, add it to the egg and sake. Keep aside.

1. Under the skin of the daikon is rather tough layer that should be removed. If you don’t peel it enough then the daikon won’t have soft texture and will be too hard. So peel the skin quite thickly – up to 2 cms deep (alternatively, cut the daikon into slices and then cut around each slice). Using the water that has been left after first rinsing the rice for dinner, parboil the daikon. Parboiling in this way takes away the bitterness of the daikon and helps bring out its sweetness.

2. Using a good amount of konbu dashi, lightly simmer the daikon until tender; in this way, the umami of the konbu gradually penetrates the daikon. The key point here is that in order for the heat to draw out the daikon’s natural sweetness, the deciding factor is the quality of the konbu dashi that you use. And in order to make the most effective dashi, please use the best quality konbu that is marketed for use in dashi.

3. Place the daikon in a bowl, spoon a little of the awase-miso over the daikon, and garnish with grated yuzu zest (or other citrus zest) and pinch of togarashi or shichimi (or similar types of chilli powder).